Everyone appreciates being recognized for doing good work. If a raise or a promotion aren't in the cards, having a couple of paragraphs praising your work appear on the White House's official blog isn't too shabby a substitute. It's even more remarkable if the work garnering attention is done by a 23-year-old working in a town of 5,000 people.

This is the reality for Dustin Haisler, the CIO of Manor, Texas, who is gaining recognition as an innovator in local government. Last year, Haisler earned praise (including some from this magazine) for dispersing inexpensive Quick Response (QR) codes - two-dimensional bar codes - all over Manor. When QR codes are read by mobile phones with the appropriate free software, users are directed to a Web site that has more information about the tagged object.

But it was one of Haisler's newer endeavors, a Web platform called Manor Labs, that President Barack Obama's tech team found appealing. Manor Labs, which launched in late October, is a Web portal where citizens can submit ideas to improve their city. From conception to (possibly) reality, every decision city officials make about a submitted idea is put in plain sight. At the same time, users can participate in and affect an idea's development. For a president who is trying to deliver on promises of government transparency, it's easy to see why the White House is giving Manor Labs a closer look. 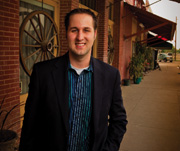 Haisler likes to describe Manor Labs as an open innovation portal. "Instead of just taking ideas," he said, "we're taking those ideas and turning them into actual solutions off the platform."

Manor Labs features elements of social media sites like Facebook, GovLoop and Digg, where users promote or bury items submitted by others. Manor Labs depends on user-submitted ideas. When users register with Manor Labs - something anyone, anywhere can do - they're given 25,000 "Innobucks," a virtual currency for use on the site. Various activities, such as commenting, voting or submitting an idea, earn users more Innobucks. If users earn enough, they can shop at the Manor Labs store for prizes like a Police Department T-shirt or even buy the right to have a week named after them.

The cornerstone of Manor Labs is soliciting ideas from city residents, or anyone else, to make the city a better place to live. What makes Manor Labs appealing besides the prizes is that users can actively participate in making an idea come to fruition. When an idea is submitted, it goes into what Haisler calls the "idea funnel," which has four levels: incubation, validation, emergence and closed.

"When an idea is suggested, it immediately falls into the incubation category," Haisler said. "Once it's in that category, people can vote and comment on it, and whoever submitted the idea can recruit team members to be a part of it. They must have [a certain number of] votes, page views, comments, and so much 'buzz' behind their idea before it advances. When they meet all of those criteria, the idea automatically graduates to the idea validation stage. So there's no staff involvement. Once it's at the validation stage, a department head will evaluate the idea and he or she will review it on a series of metrics."

The metrics include determining what problem the idea addresses, whether it's sustainable and how much, if anything, it will cost to implement. If the idea fails in

any of these areas, it's returned to the incubation stage with details explaining why it was rejected. If an idea is approved in the validation stage, however, it moves on to the emergence stage.

"That's where we all sit down - all the department heads - and talk about each idea and figure out if this is something we can pilot," Haisler said. "Is it something we can partner with a company or university to do? Can we develop it with open source software? Is this something that's a minor change like flipping a switch?"

Although Manor Labs was launched just a few months ago, several ideas have already been implemented, including an RSS feed to notify residents of new construction, maintenance and repair work, and adding an automatic debit system to pay utility bills online.

The auto debit billing idea is, according to Haisler, an ideal example of what Manor Labs makes possible.

"By making a few process changes and a few calls to the bank, we got it going," he said. "It was just a quick idea that we'd never thought about. It was quick, efficient and didn't cost us anything."

The platform invites citizens and city officials to collaborate and develop ideas. It also gives citizens a clear look into the decision-making process. Every time an idea advances or is rejected, the decision-makers detail what happened. Haisler likes the system because it engages citizens; the city likes it because it generates new ideas to improve Manor while living up to the call for transparency.

"Basically we're crowdsourcing some of the thought processes. It's creating new staff members who are volunteer-based," Haisler said. "We've had a lot of good ideas come out of it. There have been a lot of things that have really made us think. The department heads love it because they're getting ideas on how to make their departments more efficient, and because it's visible to everyone in the world. [Everyone] can share their experience. They can give knowledge, and they can take away knowledge from the platform."

Getting in the Game

Certain elements turn modern Web sites into online destinations. One of the easiest and most effective ways to foster traffic to a site is giving users a reason to return. This is often accomplished by giving users the option to make comments or vote on things. If a user leaves a comment on a story on a newspaper's Web site, for example, it's likely he or she will return to see who responded to the input. This interactive component is what makes sites like Fark or Facebook so popular.

When designing Manor Labs, Haisler kept this in mind. He calls it adding a "game mechanic" - what keeps people engaged and prevents the site from stagnating. It also helps keep Web-surfing "no-goodniks" from polluting the site with spam or other offensive content.

"To get someone to go back to a platform, you make a game out of it and you allow them to be rewarded for participating," Haisler explained. "Users are ranked and rewarded for their participation based on user votes on their content. So if they submit an idea and get 10 demotions, their rank is going to fall. That's a way to see how much value that person brings to the system. It also keeps people who want to use it as a political soapbox from doing so. Basically there are repercussions for not adding value to the platform.

"Everyone starts with a 50 rating. The more value they add to the system, the more promotions on their comments - anything you do on the platform - other people can rate that. If I comment on an idea and people think that comment was out of line, they can demote that

comment and my ranking will go down as a result."

Manor Labs has other clever incentives to keep people involved, including a leaderboard (that's also published in the town's newspaper) that features the most popular ideas, the wealthiest members (in terms of Innobucks) and members with the best reputation. Users can also invest their Innobucks in other people's ideas, gambling on whether the idea will make it. If the investment is wise, the user reaps an Innobucks windfall. But if it fails, the investor loses everything.

Despite all the game mechanics and the Innobucks, at its heart, Manor Labs is an innovative application designed to enrich the lives of those who participate, while enriching the city.

"We've found it really helps to motivate people to get on board because they see that their ideas are at work," Haisler said. "It's a platform that is making ideas into solutions."

Chad Vander Veen previously served as the editor of FutureStructure, and the associate editor of Government Technology and Public CIO magazines.

Read more to see how Cisco helps the City of Buffalo in a 48-hour race for work-from-home unified communications.

This pandemic and its evolving consequences have shown that technology is an increasingly important component that enables governments to stay securely connected and productive.

Organizations in every industry are grappling with unprecedented data management challenges—and state and municipal government entities are no exception. In fact, they have the added burden of addressing numerous electronic discovery (eDiscovery) and compliance issues as they gather, store, and transmit massive volumes of information.