Where Next for Trump’s Infrastructure Plan?

President Trump formally unveiled his new infrastructure plan this past week. So what’s in it and where will infrastructure improvements likely go next? Here’s a roundup of coverage, related alternatives and thoughts on next steps.

The infrastructure initiative highlights four “key principles” (details are listed at link above):

“The Nation’s infrastructure needs to be rebuilt and modernized to create jobs, maintain America’s economic competitiveness, and connect communities and people to more opportunities. …

Underperformance is evident in many areas, from our congested highways, which costs the country $160 billion annually in lost productivity, to our deteriorating water systems, which experience 240,000 water main breaks annually. …”

An additional $20 billion would go toward "projects of national significance" that can "lift the American spirit," such as New York's Gateway tunnel under the Hudson River.

Another $50 billion is earmarked for rural block grants, most of which will be given to states according to a formula based on the miles of rural roads and the rural population they have. States can then spend that money on transportation, broadband, water, waste and power projects.

The rest of the money would support other infrastructure-related undertakings, including existing loan programs like the one operated by the Environmental Protection Agency under the Water Infrastructure Finance and Innovation Act, which White House officials said could leverage up to $40 in local and private money for every $1 in federal investment.

Mainstream news media response to the plan was all over the map. Here are some examples:

Critics of the plan focused on the lack of new money identified to pay for the plan as well as rollbacks of previous regulations:

“President Donald Trump's infrastructure plan would trigger one of the most significant regulation rollbacks in decades, benefiting not just roads and bridges, but businesses ranging from coal mines to homebuilders to factories.

The blueprint the White House released this week would eliminate the Environmental Protection Agency’s authority to veto the Army Corps of Engineers’ wetlands permits, a power that the EPA wielded during the Obama administration to block a controversial mountaintop coal mine in West Virginia. Industrial facilities like coal plants and steel factories could get 15-year Clean Water Act pollution permits — up from five years — that would be automatically renewed. For some infrastructure permits, the deadline for opponents to file legal challenges would shrink from six years to 150 days.”

The National Governors Association released the following response to the new infrastructure plan:

That is why it is absolutely paramount that state, federal and local governments continue our longstanding partnership to invest in quality infrastructure and meet the nation’s needs. A strong cooperative relationship between states and the federal government is essential to best serve the interests of all citizens.

President Trump and Congress have an opportunity to not only invigorate our approach to infrastructure spending, but to stabilize the funding streams that state and local governments depend on the most, such as the Highway Trust Fund, while supporting programs like the Drinking Water and Clean Water State Revolving Funds. …”

NGA Chair Nevada Gov. Brian Sandoval, in prepared remarks, drew heavily on transportation and energy to illustrate opportunities for innovation, including autonomous and electric vehicle technology, drones, ridesharing, and more. (His NGA chair’s initiative, Ahead of the Curve: Innovation Governors, focuses on how states can respond to emerging technology in the energy and transportation sectors.)

He also touched on the uncertainty at the federal level regarding infrastructure. “The President has an incredible opportunity to invigorate not just our approach to infrastructure spending, but also to the funding stream state and local governments rely on most: the Highway Trust Fund,” said Sandoval.

In addition, he called on the federal government to “match the rapid pace of autonomous vehicle innovation” with the states, saying state and federal coordination on this issue will remain critical.

The American Association of State Highway and Transportation Officials (AASHTO) issued the following statement Feb. 12, in response to the public release of the long-anticipated White House infrastructure proposal.

"State DOT leaders appreciate the president's ongoing interest in, and support for, increased federal investment in infrastructure," said Bud Wright, AASHTO executive director. "We hope the release of the Trump infrastructure plan can be a starting point for a robust conversation on how best to make the critical investments in surface transportation. AASHTO and its members stand ready to work with the Administration and Congress to address the long-term viability of the Highway Trust Fund and to speed the federal review and permitting process."

Meanwhile House Democrats unveiled their own infrastructure proposal, which they called “A Better Deal for America.” The Washington Post showed this press conference covering their alternatives.

Cities Respond on Infrastructure as Well

The National League of Cities (NLC) released their own “Rebuild With Us” proposal in January, and their proposed partnerships included investments in transportation, workforce, water and broadband. Their news release response to the President’s plan can be found here. Here’s an excerpt:

With the release of this plan, the White House will hopefully start a domino effect in Washington for Congress to pull together a bipartisan bill that works with cities to rebuild America's infrastructure," said National League of Cities (NLC) CEO and Executive Director Clarence E. Anthony. "Congress must step up to join cities in the fight to repair our nation's crumbling infrastructure and build for 2050, instead of simply fixing 1950. Now is the right time for Congress to join us in rebuilding national networks and core infrastructure that delivers what Americans want — great infrastructure that works for them and the economy."

Cities call on Congress to frame an infrastructure plan that works collaboratively with cities and reflects five guiding principles:

One central tenet of these new infrastructure plans is the reliance on public-private partnerships to leverage government dollars to go farther with more private-sector investment.

Because P3s cover a broad range of innovative contracting, project delivery and financing arrangements, a singular definition is difficult to establish. P3s take various forms based on the type of infrastructure involved and level of risk sharing sought by the public sector. Key characteristics of P3s, delineating them from typical arrangements between the public and private sectors, include the transfer of risk from the public sector to the private sector, the marrying of multiple steps of the procurement life cycle and the shifting of some public-sector responsibilities to the private sector.

One definition which is widely accepted and can be useful beyond the area of transportation comes from the U.S. Department of Transportation:

“A public-private partnership is a contractual agreement formed between public and private sector partners, which allows more private sector participation than is traditional. The agreements usually involve a government agency contracting with a private company to renovate, construct, operate, maintain, and/or manage a facility or system. While the public sector usually retains ownership in the facility or system, the private party will be given additional decision rights in determining how the project or task will be completed.” — The U.S. Department Transportation 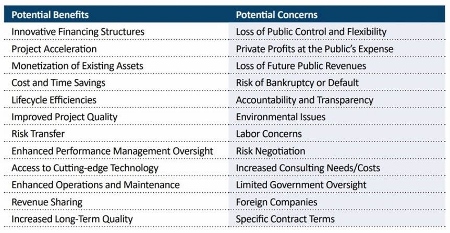 Final Thoughts on Infrastructure Next Steps

Although we have a ways to go before disparate legislative proposals are merged with this White House plan on infrastructure to produce meaningful, lasting improvements, it is important to understand the main players and various proposals already on the table. Do your homework on the range of options available.

A deal will eventually be reached somewhere in between these proposals, although a new gas tax is not a certainty. With the help of analyst and historian Andris Ozols, here are some recommended principles and guidelines for government infrastructure framework efforts:

This infrastructure topic plays into so many other government priority topics, such as critical infrastructure protection, cybersecurity, smart cities and more. It is also one of the few areas that has bipartisan support — albeit with very different perspectives and proposals from different groups.

President Trump said this during his recent State of the Union address: “We will build gleaming new roads, bridges, highways, railways and waterways across our land. And we will do it with American heart, American hands and American grit.”

Let's get to work.