As we attempt to connect our government technology dots over the past few years, there are many enduring themes and disruptive topics that keep showing up. So what was hot in 2017 that will endure well into 2018 and beyond? Here’s my rundown of technology trends that both elected leaders and government CxOs keep talking about — with highlights from the joint NASCIO/PTI Technology Forecast for 2018.

What happened (of significance) in 2017 that will shape 2018 and beyond in government technology?

Beyond 2018 cybersecurity predictions or year-end summaries that highlight headline-grabbing 2017 stories, what government tech trends can inform how we set priorities for 2018-2020?

Here is my attempt to connect the government dots as we head towards 2020.

There are many different answers to these important questions. For example: Deloitte offered their annual government perspective on tech trends calling it: The kinetic enterprise in 2017. Here’s an excerpt: “As in the past, we seek to shed light on the anticipated level of government relevance and readiness for each trend:

Gartner addressed the same shift in its Gartner Top 10 Strategic Technology Trends for 2018, with assessment of global megatrends. Also see: Gartner Identifies Three Megatrends That will Drive Digital Business into the Next Decade — which covers the hype cycle for major technologies.

Meanwhile, Governing magazine offered these 9 issues for states to watch in 2018. These items include (you can read the details at the Governing article link):

On technology, the article said: “States are increasingly being asked to referee fights between mobile phone carriers and local governments, as the wireless industry sets out to build the next generation of data networks.

The reason for the clash is that the new 5G wireless networks are built differently than their predecessors. Existing mobile systems rely on equipment installed on towers and tall buildings that are relatively far away from one another. But 5G technology requires a much denser network of 10 to 100 times as many antenna locations, so that the networks can handle the surging demand for data from mobile phones, driverless cars, wearable devices, surveillance cameras, high-tech streetlights and other building blocks of ‘smart cities. …’”

On election cybersecurity: “The 2018 elections could provide an opportunity for states and localities to restore confidence in voting systems that came under intense scrutiny during the 2016 presidential campaign.

This year is likely to see unprecedented coordination among state and local election officials on security-related issues. Last October, they formed a working group with the U.S. Department of Homeland Security to address concerns over hacking. In exchange for partnering with Homeland Security, state election officials now can obtain security clearances, which will allow them to receive intelligence about specific cyberthreats. ...”

Meanwhile, the 2017 State CIO Survey from Grant Thornton, which is run in partnership with the National Association of State Chief Information Officers (NASCIO), covered these topics and more

Top policy and technology priorities for state CIOs in 2017

The NASCIO priority list of hot topics for 2018 was led by security and risk management, cloud computing and consolidation. NASCIO teamed up with the Public Technology Institute (PTI) again this year to provide a free webinar on what state and local governments can expect to see in 2018. The webinar was called, Technology Forecast 2018: What State and Local Government Technology Officials Can Expect. This was the 10th year that this presentation was offered, and we will dive into some of the related details.

Here is a view that includes state and local priorities:

The results also match up with what the Center for Digital Government found in 2016 with its own survey of state CIOs, as well as 2017 surveys of county and city IT staff — all of them list cybersecurity as their top priorities.

On a recent NASCIO/Public Technology Institute (PTI) Webinar on regarding state and local government technology for 2018 the top trends included flat spending, much more cloud services, efficiency efforts, cybersecurity as a business risk, FirstNet rollout, digital government and CIO transitions with gubernatorial elections. More cybersecurity insurance is being purchased by states — up from 20 percent in 2015 to 38 percent in 2017.

The PTI Local list of technology items that are in and out in local government this year looks like this for 2018: 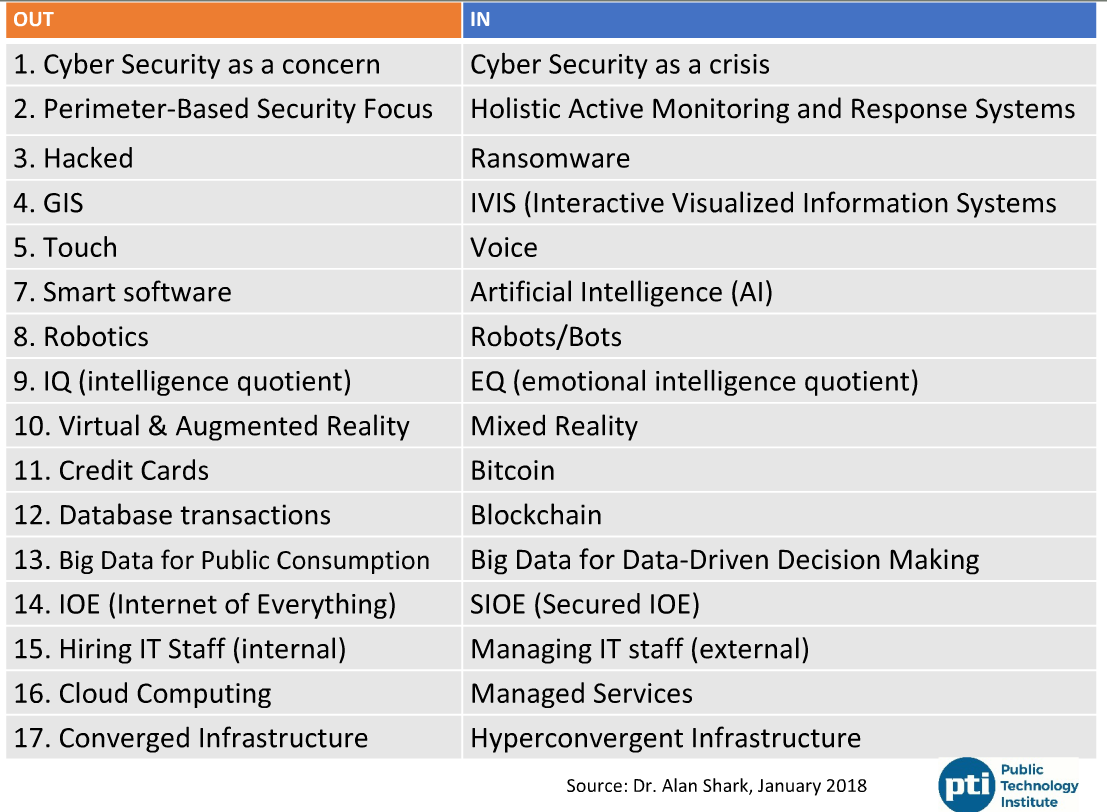 What Else? My Take — A Quick Look at Technology Issues from 2017 that Won’t Go Away (and Should Not Go Away) in 2018 and Beyond

My thanks to Andris Ozols for help on this list that is organized (somewhat) from A-Z with links to supporting materials for further review.

Example: Amazon Narrows Choices for Second Headquarters to 20 — “Amazon named 20 metropolitan areas as finalists for its second headquarters after reviewing 238 proposals from across the U.S., Canada and Mexico. New York, Chicago, Columbus, Ohio, and Indianapolis are among the choices.”

“Nevada Gov. Brian Sandoval was joined by leaders from Google, Uber, Amazon and others. They urged government's continued support for advancing autonomous and electric vehicles.

Alongside representatives from some of the transportation tech industry's most innovative companies, Nevada Gov. Brian Sandoval told an audience at the 2018 Consumer Electronics Show (CES) in Las Vegas that it is state government's duty to support the growth of emerging technologies like autonomous and electric vehicles.

Example: To Unleash Blockchain's Potential, Government Must Direct Its Growth

Examples: Redistricting Cases Could Redefine State and U.S. Politics in 2018

More than a dozen cases on partisan and racial gerrymandering are winding their way through the court system. Two cases, in particular, could become two of the most important this decade.

Example: How Trusting Tech Can Improve Disaster Response
Using data from both government and volunteer sources is key to an effective disaster response strategy.

Identity management, data use in districting, access and transparency to data and information in exercise voting opportunities and rights. See articles above from Governing.

Example: All 50 States Have Joined FirstNet as Deadline Closes

A flurry of states indicated they would join FirstNet as the 90-day opt-in deadline came to a close.

All 50 states, along with two territories and Washington, D.C., decided to join FirstNet, the dedicated, nationwide first responder network, by its Dec. 28 deadline.

Example: One of the findings of the 2017 federal CIO survey conducted by Grant Thornton and the Professional Services Council was that almost half of the 27 chief information officer positions at the largest federal agencies remain open 249 days after President Donald Trump’s inauguration, and this has agencies worried about their ability to enact ambitious information technology modernization plans.

With the rapid pace of innovation, each governor and state CIOs can be challenged to keep up with emerging technology developments. The National Governors Association recently launched NGA Future, an initiative to give governors insights into potentially disruptive technology that is three to five years away.

Example: The FCC’s recent Net Neutrality ruling adds another dimension to a simmering debate over who controls broadband service and related infrastructure.

Example: Trump Wants to Expand Offshore Oil and Gas Drilling. Does the Industry?

Example: Women in Tech Speak Frankly on Culture of Harassment — The New ...

The disclosures came after the tech news site The Information reported that female entrepreneurs had been preyed upon by a venture capitalist, Justin Caldbeck of Binary Capital. The new accounts underscore how sexual harassment in the tech start-up ecosystem goes beyond one firm and is pervasive.

Smart Government and Cities as an Applied Best Practice

T - Tax Legislation and IT

Example: Maine Officially Becomes Next State to Join Unemployment Insurance Cloud Consortium — On Dec. 6, the state of Maine migrated the benefits side of its unemployment insurance system to the cloud, joining the four-state consortium

There is a lot in this blog to ponder, and way too much to cover in detail in one piece.

My hope was to provide a 50,000-foot overview of the issues and technology trends in government that are facing us moving forward this year.

I plan to cover the president’s new infrastructure plan and state and local impacts in much more detail over the next month.

The Prescription for Thwarting Cyberattacks

Hackers can wreak havoc on public safety communications networks. Fortunately, there is a lot that agencies can do to increase the difficulty of hacking their networks to lessen, and even prevent, the effects of cyberattacks.