In summer 1998, Sacramento County, Calif., and Phoenix, Ariz., entered the world of public-sector enterprise resource planning (ERP) with their eyes wide open. Each needed to replace disparate legacy systems in various departments with an all-in-one enterprise system that integrated individual business processes and their data. Ten years later, the two governments who led the way for local government ERP provide insight on how they did it and what they've gained. Both purchased solutions from ERP software giant SAP, and they're two of the company's oldest local government customers.

"These are really the first two SAP public-sector customers in the U.S. Sacramento County and the city of Phoenix, in my opinion, they're really on the leading edge of the rise of platform," said Rod Massey, vice president of SAP's Global Public Sector.

"We had a lot of legacy systems, mainframe systems that did various components of our business. We had a purchasing system that was vended, a financial system that was vended and an HR system that was vended. And they were from three different vendors," said Michael Connelly, an IT manager in Sacramento County's Office of Communications and Information Technology (OCIT). Connelly wasn't there for the original implementation, but he currently manages personnel who perform system upkeep. "These were older legacy systems, and so we thought, rather than just spending a lot of money trying to bring these into compliance, why don't we put that money to use instead and bring in a newer system and maybe something that integrates all of these pieces?"

And that they did. According to Connelly, the move to bring ERP into county government was spearheaded by business units that wanted to replace end-of-life programs that might not function in the new millennium. They also wanted to streamline data transfers between departments. 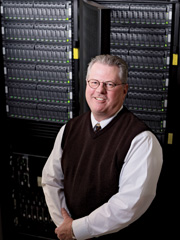 "If you have separate systems, somehow you have to link the information from one system to the other. Things don't always translate right. Things don't always work the way they should," he said. "And inevitably, your systems are out of sync. They have different data in them. Transactions don't happen that you thought should happen and so forth. With an ERP system, it's all integrated. So purchasing feeds finance, HR feeds finance, finance feeds purchasing."

The county shortened its hiring process by two weeks after the deployment. Sacramento also eliminated the distribution of paper reports, which used to take 80 hours.

But the government didn't only implement the solution to save time and manpower hours -- a threat loomed on the horizon. Y2K was coming, and as early as 1997, the government wanted to prepare for it. Many people worried about applications that could only handle 20th century dates beginning with 19. How would these programs handle newfangled 21st century dates starting with 20? The county wasn't waiting to find out.

"There were several systems that needed to be upgraded for Y2K, and we came to the realization here at the county that, rather than try to upgrade these, in some cases, nearly 15-year-old systems, maybe it would be more cost-effective to upgrade to an ERP system, which really consolidates things and integrates things," said Jim Hicks, principle IT analyst for the operations server support department within the OCIT.

According to Craig Rader, a Sacramento County purchasing agent, the county purchased the system in 1997 and implemented the first phase, which included financial, purchasing and inventory, in July 1998. Following that, the HR module was deployed in January 1999. Since the 1990s, the county has

used more modules, but has yet to utilize the ERP's full functionality.

"So even though we might not be using all the modules, we can implement them at any time because, my understanding is, we own the licensing for everything," Rader said.

Hicks leads the team that manages the ERP's operating system and its interface with the back-end Oracle database and the physical servers that support the whole setup. Connelly's team handles the modules at the application level and configures how they operate and communicate with each other. The latter team works with county departments when they need to modify or augment their applications. 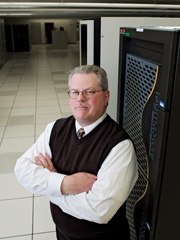 "A lot of paperwork and forms were eliminated," Connelly said. "Obviously some business processes were shortened, but probably the biggest advantage is the elimination of redundant information and the integration that you get by each part of your business feeding the other parts."

County departments can quickly generate reports on expenditures to monitor their activities and purchases because the ERP system stores the data. Reports that used to take 10 days to produce can now be immediately produced and available through workflow mail systems. Before the ERP system was deployed, three county employees spent three days each month making labor and pay calculations, but now these calculations are done automatically.

A Wealth of Benefits

ERP also made a big difference in how employees get their work done in Phoenix -- Arizona's capital and arguably most well-known city.

"What it has allowed us to do is make better decisions and rapidly assess where we're at," said Tammy Ryan, management services administrator of Phoenix's Water Services Department. "We can actually go right into the system, find out exactly to date how much we've spent. You can go do immediate analysis on your electricity usage or your electricity costing."

This is important in Water Services, where people must know how much electricity treatment plants use and how much money is spent on chemicals. ERP tools make rapid analysis a convenient technological reality. And Phoenix, just like Sacramento County, also benefits from speedy report creation.

Before the city's 1998 SAP implementation, the municipal financial system wasn't the user-friendly application it is today. Previously employees pulled up reports by microfiche and prepared entries on paper, and Ryan doesn't even recall accessing the system by computer like people can now. She doesn't think Phoenix would be able to function in today's high-tech environment without ERP.

"You would have had to have [gone] to a system like this," she said. "I don't think, with people needing real-time data, that you could have used the old system we had where you waited at the end of the month and did batch processing. I suppose we could have, but you would have been really slow in reacting, and that's just not the world we live in today."

Phoenix began its ERP journey in the late 1990s with similar concerns to Sacramento County's -- Y2K and older systems with low-integration functionality. The government hired a consulting firm to perform a risk analysis to assess the city's needs and what solutions could help. Phoenix purchased the same product Sacramento did, which was named SAP R/3 at the time. The city's Finance Department manages the system.

"We had a lot of challenges in trying to get

people to let go of these niche systems that they had in their departments. So that was a challenge, to make people feel comfortable enough with the central agency that we could provide their needs," said Deputy Finance Director Susan Perkins.

Although Finance manages the system, she estimated that around 30 departments use it for their own needs when necessary, including accounting, bill paying and inventory management functions. The city still uses PeopleSoft for HR payroll in a separate system from the SAP software. Perkins estimated that about 3,000 employees use the ERP system compared to the some 900 who started using it right after the initial 1998 go-live date. This increase in users is due to the system being deployed to more areas over the years.

Case in point: the Aviation Department. In 2000, Phoenix began the ERP rollout there and finished after 18 months, according to city employee Jan Mueller. Today she's an administrative assistant for the Metro Facilities and Energy Management Division of the Public Works Department, but back then, she worked for Aviation and played a role in the SAP implementation.

"At the airport in 2000, it was a transition trying to get foremen used to being in the field to track their work, to sitting in front of a computer to track their work. So that cultural shift was a little bit difficult to address," she said. "But it really was very successful out there. I think it still is. It's so simple to run reports."

Now the system's so ubiquitous that it's hard to picture any Phoenix citizen who hasn't been affected by it. The ERP solution stores information about city buses, including make, model and year, and a fleet-management module tracks how often oil and air conditioning service should occur. City personnel also use it to track information about police radios, light poles and traffic-signal equipment. The system manages the deployment of street signs on city roads, and space and rental areas for concession shops in the Phoenix Airport System.

And the Trend Grows

SAP's Massey believes ERP use will grow in the public sector. It'll likely have to -- citizens expect greater, speedier service from their local governments, and agencies will be forced to comply. This was the main reason why San Buenaventura, Calif., recently purchased an ERP system from Agresso, an ERP-providing subsidiary of the Netherlands-based company Unit 4 Agresso.

The previous system was custom written by the city and became functionally obsolete. Emerson and his team began the Agresso implementation in November 2007 and expect to finish by summer 2009. They've already deployed numerous modules, including those for general ledger and purchasing. Emerson said Ventura paid about $1.2 million for the ERP software and consulting.

Phoenix and Sacramento County also brought in consultants as part

"We probably underestimated the amount of work that would take. We ended up, part of our implementation cost was for SAP to actually bring people out of SAP Germany, which is where they're headquartered, and locate themselves in Phoenix to help us through the project," Perkins said. "And they had kind of a hotline to Germany so they could talk to the programmers and actually configure code differently for government."

At first, Phoenix had trouble budgeting for a project of the ERP system's size, and city personnel discovered it was a more robust animal than they first expected.

"To implement a system like this, you need technical expertise, people who know the SAP side of it, and we filled that in with consulting. Then you need, of course, people who know the business side of it, who work closely with the technical people to explain how we do our business in the county, so that that configuration can take place properly," Connelly said. Sacramento County had a team of more than 100 employees in addition to several SAP consultants to get things moving.

In a sense, Sacramento County and Phoenix paved the way for other jurisdictions to make ERP part of their government landscapes. Now areas like Ventura are experiencing some of the same growing pains their predecessors overcame.

"Most organizations change their systems once every seven to 10 years. We haven't changed it for 25 years," Emerson said. "And [when] you've got people working here for 25 years, it's very difficult to change because they're basically in their 50s and it's the only thing they've ever worked on. And it's a big shock."

If Emerson could go back and redo everything, he's not sure what could be done differently to make the transition smoother. "I don't know how much more we could have done with it because a mindset is a very hard thing to change at times," he said. "You just have to keep working at it."