How Microsoft Word Hopes to Resurrect Itself on Your Smartphone

Microsoft's Office's new mobile Word app is positioning itself to be a leader in the race for top typing and productivity apps. But will it work?

by Jason Shueh / November 11, 2014
Microsoft CEO Satya Nadella led the company to announce its free suite of Microsoft Office apps for smartphones and tablets on Nov. 6., a move aimed to compete with Google's and Apple's productivity platforms. Microsoft/Paul Clarke Photographer

Microsoft Office has finally arrived as a real contender in the world of smartphones.

In the wake of the Microsoft Office Nov. 6 debut of its freemium Word app for mobile devices, the software has drawn a hail of critique and conjecture — with much of it being praise. This week alone, downloads have propelled the app to the top of the iTunes chart for most popular free apps. And in general, a quick swipe through the app’s interface presents quick testament to its navigable and user-friendly features — a stark contrast from previous iterations.

For years, Microsoft has struggled as the unlikely underdog in the domain of mobile word processing apps. Awkward renditions of its desktop version of Word — either too simplified or too complex — have given rise for newcomers like Apple’s Pages for iPhone and Google Docs, its primary competitor, to take away valuable market share. The blow is especially poignant considering Microsoft has largely pioneered writing platforms in both the public and private sectors since it launched its first version, Word 1.0, in October 1983 and its Windows version back in 1989.

To catch up and keep pace, Word — along with its fellow Office apps like Excel, for spreadsheets, and PowerPoint, for presentations — have returned to smartphones as standalone apps to replace Microsoft’s mobile Office Hub — an app that comprised versions of all three. Its freemium pricing model includes Word’s basic functions and a premium option that delivers all of Microsoft Office 365’s apps across devices, $6.99 up to $9.99 for the suite and additional data storage.

Those who opt for Word’s free version are limited to fundamentals. Writing, for example, must be done in a vertical layout — unless a doc is first downloaded with a horizontal layout — and functions like styling images are strictly confined to essentials (sizing and placement settings only). Text features, however, are fairly unrestricted with limits on less notable styling options like word art.

Users will choose Word over Google Docs if they want a tool that cherry picks advanced features of a desktop writing app and packages them nicely into a mobile interface. Word’s multiple view options showcase this concept perfectly. Using tap-friendly buttons tucked in a menu bar at the top of a page, writers can select views that either fit text to a phone’s screen size — a view Microsoft calls “Reflow” — or depict it in print layout. In practice, this means typing can begin as fitted to smaller screens, and when finished, be viewed and formatted in a typical print layout. With Google Docs, a print view is accessible yet unalterable, as the view prohibits typing and editing. For jobs small or big, Word is equally mindful. The app smartly integrates handy tools like iOS X’s updated version of word completion during typing and voice transcription — both handy tools that take the edge off the mobile typing experience. However, out its many attributes, the biggest selling point is likely the program’s lineage. Whether fan or foe to Microsoft, it is indisputable that Microsoft Office is a pervasive tool for productivity. As such, the mere fact that users can open and edit a Word doc through email may be enough to keep the app around — even if it’s not the default favorite. 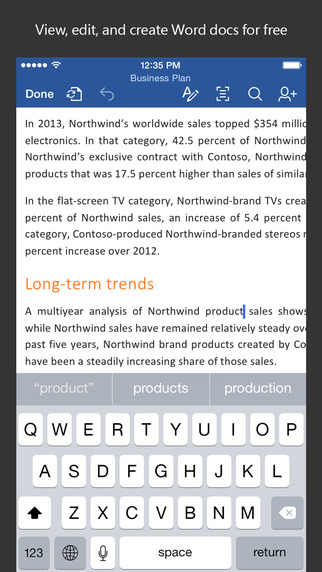 The app is by no means perfect, which is best exemplified in its stilted sharing and saving features. Unlike Google Docs, which allows a document to be edited by multiple users in real time, sharing documents in Word must be done with Microsoft’s relatively barren browser version of Word, also free for users. Also, the app's saving/syncing is not instantaneous, as with Google. Jump too quickly from the app and progress could be lost. Further, it’s all but implied that the full version of 365 is required to fully utilize the product since users will definitely want to create and edit documents at the office or at home — a caveat Microsoft is undoubtedly banking on.

Despite minor imperfections, Word is still an amazing piece of mobile software that commands notice. Its syncing and sharing can be improved, but the design is simple enough for mobile yet functional enough for higher-level edits. And even with Microsoft’s hard sell for a premium purchase, the truth is, Word is a staple at most offices, so it’s likely consumers and businesses already own a version for the desktop. And when you add “free” to the mix, the decision to download is nearly a given.

How 5G Will Transform Cities - And How Cities Are Preparing

5G Ready: Preparing Your Organization for the Future