California county has connected all of its first responders in 31 counties for years.

The assertion that all responders from cities within one county should share an interoperable communications system really isn't debatable in the United States. The delays caused by a lack of interoperable communications between fire and police at the World Trade Center on 9/11 are common knowledge. But many counties still struggle to persuade first responder agencies in cities to agree on uniform system specs.

Their concerns are serious. In 2003, the National Task Force on Interoperability outlined five obstacles to achieving county interoperability. The task force blamed:

However, four years before that report, Orange County, Calif., managed to connect all of its responders in 31 cities on the same 800 MHz trunk radio system. The system supports more than 17,000 radios and averages about 55,000 transmissions daily. The trunk system uses 81 channels and has nearly 400 talkgroups.

Local governments that still struggle to achieve similar levels of interoperability can look to Orange County for insight on how to make it happen.

Motivating agencies that control their own budget to agree on unified standards can seem out of reach. It's a paramount obstacle to interoperability in most counties, according to Harlin McEwen, chairman of the Communications and Technology Committee of the International Association of Chiefs of Police. First responders continue to fear that losing control over the system will keep them from ensuring that it meets their needs. Also, if the system doesn't perform to their liking, what recourse do they have?

But that wasn't a problem in Orange County, said Scott Maddy, communications specialist for the Anaheim Police Department (APD), which shares the Orange County system. Maddy, who joined the APD in 1972, oversaw the agency's migration in 1999 to the new system.

One key to this end was a technical-liaison committee that met monthly for six years to assure that the technical and operational issues were resolved. The committee included sworn and nonsworn personnel, technical and nontechnical personnel, field and dispatch, and all disciplines -- including fire, police and public works.

In addition, Orange County's communications staff branched off into several radio shops, each specializing in a particular aspect of responder communications. One shop focuses on dispatch needs, another on mobile radios, and so forth.

"Say a packset [multichannel radio] no longer functions. I drop it off with the county communications staff, and I usually have it back within a couple of days," Maddy said. "They are very attentive to anything that law, fire or public works need. I don't think it could get any better."

"We kind of looked out for all of the cities, and everything we did, we did in concert with them," Stoffel said.

As for the fragmented budget problem, Orange County also had a solution for that.

Each responder agency is usually on a different budget cycle, so it's difficult to combine funding to purchase a system for all agencies at once. Orange County planned for its interoperable system roughly five years in advance to overcome that challenge. Each city's responder agencies began putting money aside in an escrow account. The county approved the contract in 1995 and deployed it between 1999 and 2001. Each city raised 100 percent of its share of the funding by the time the system was operational, Stoffel said. The contract cost $82.7 million.

Most local governments endorse interoperable communications in principle. However, insight from an Orange County responder about how life was before and after interoperability could deepen the perspective of cities elsewhere that are still in the discussion stage.

Interoperability accelerated response actions involving both police and fire, said Gary Dominguez, division chief of the Fullerton (Calif.) Fire Department. He recalled the delays involving police and fire before the current system. If the police wanted to communicate with fire, they sent a message through the police dispatcher, who then called the fire dispatcher, who in turn relayed the message to firefighters.

Dominguez recounted a typical exchange with police during these situations: "We'd get in there, and the cops would say, ‘What took you so long? We told you to come in 20 minutes ago.' Well, you didn't tell us -- you told the dispatcher who had to tell another dispatcher, and one of those dispatchers got busy with something else."

Just before switching to the interoperable system, Dominguez experienced a close call that could've seriously injured a police officer. At an incident involving chemically hazardous materials, he noticed a cop standing in a gutter filled with toxic substances.

"I could see the cop standing in the material, but I couldn't communicate to him that the material was going to eat through his shoes," Dominguez said. Identifying those types of materials was not part of Orange County police training. Thankfully an impromptu message saved the cop's feet.

"I wound up being able to tell a fire unit that came around the corner, ‘Hey, get that cop out and into a safe zone and identify hot zones for him,'" Dominguez said. 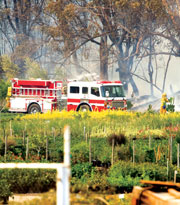 He also related an example of quicker action enabled by interoperable communications. Firefighters received a call from police, requesting fire to provide "medical aid" to a multifamily dispute. The firefighters responded with their standard level of urgency until another police officer got on the interoperable radio to inform them that three children had been stabbed.

"That geared us up right away, and we had additional resources coming. The interoperability eliminated the time lag; it just puts us all on the same page," Dominguez said.

In Orange County, there's also a dispatch-to-dispatch talkgroup that lets dispatch centers share information with one another. For example, if a local public safety answering point lost its 911 trunks or if an agency needed a language translator, it would use this talkgroup rather than the phone.

The unified system also empowers dispatchers to more quickly find the best-suited responders for incidents with its "red-hot" receiver. Every city sheriff patrol unit and every dispatch center monitors a talkgroup known as Red. Law enforcement uses the Red talkgroup to disseminate countywide broadcasts such as Amber Alerts and crimes in progress. All units in the county can track the progress of each incident through the Red talkgroup.

Without the red-hot receiver, dispatchers would be calling other dispatchers on the telephone to pass the word to their responders, which delayed the alert.

This story appears in the Winter 2009 issue of Emergency Management.

Tools to help keep your teams on track even when they’re apart.