Californians Want Improved Government Websites Above All Else

A quick analysis of interesting new data about Californians' opinions of technology offered by state and local government.

More Californians think that improving state and local government websites should be a top tech priority, even more than those who believe IT security should be the priority.

Opinions are split along generational lines. In the infographic that Accenture shared with Techwire, baby boomers and millennials seems to value different things.

This was one of the key findings from an Accenture survey of 1,000 Californians in December 2016, conducted by McGuire Research Services Inc.

The fact that digital technology security landed fourth on the list is somewhat surprising, given that instances of security breaches and nation-state hacking are in the headlines every day. The survey was conducted three months ago, prior to detailed revelations about Russia's purported involvement in cyberintrusions to allegedly affect the U.S. election.

But the findings do indicate just how vital online digital services — websites, apps and data — have become for citizens who want to interact with their government.

Another data point from the Accenture survey dives deeper into what Californians want to use apps for. 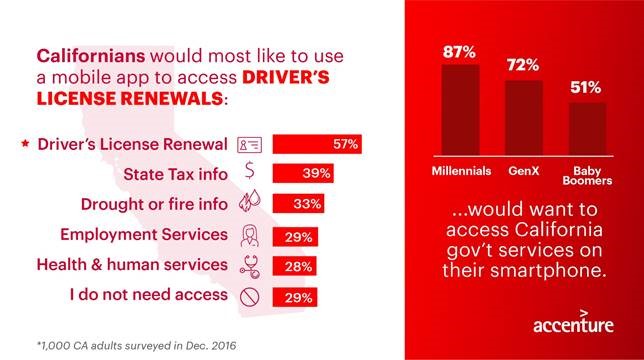 These results confirm that citizens are most interested in common touchpoints that they use most frequently or regularly — DMV, tax agencies, unemployment benefits, and health and human services. As it stands today, California state government does offer mobile apps through the California Mobile Gallery for some of the functions mentioned in the survey. This shouldn't come as a surprise, but millennials are most interested in using a smartphone to access government services.

Here's one more from the survey. Digital government doesn't always come out on top, and demographics seem to be a factor.

This article was originally published on Techwire.

Funding Safe and Secure Elections During the COVID-19 Pandemic

The pandemic has upended every facet of American life, but one area where it could still have an outsized effect is the upcoming 2020 elections.